An Irishman ponders food and family history on a visit to three contrasting neighbouring countries in Latin America.

We entered the Republic of Paraguay like ghosts over the “Friendship Bridge” in the bright early morning after driving all night from the Brazilian city of Curitiba, edging along the narrow footpath with hordes of economic tourists and native Paraguianos carrying live chickens and other exotic delights.

The “creatively” named Cuidad del Este (Eastern City), the second largest in the country, lies hundreds of miles from the colonial splendour of the capital Asuncíon. Before 1989, the city was known as Puerto Presidente Stroessner after Paraguay’s strongman leader who ruled the country from 1954 until he was overthrown in a military coup in the year of the renaming. A rather unlovely conurbation of ca. 300,000 inhabitants, the city is nestled between Brazil and Argentina, naturally bordered by the Paraná river.

Cuidad Del Este thrives on the steady tax-free retail trade, mostly serving the expanding Brazilian middle class fleeing the sky-high VAT introduced by Luiz Inacio da Silva‘s Partido des Trabalhadores (Workers Party) government. Tour buses pile round-the-clock into the neighbouring Brazilian town of Foz Iguaçu, laden with shoppers who travel back and forth across the open borders. In recent years, it has become quite a popular location for smugglers, keen to take advantage of the lax controls on the frontier.

The riotous streets of this eastern city were reminiscent of a busy market district in South-East Asia, neon signs and billboards crowding out the blue sky. In the large interchangeably designed stores that line the streets, we browsed through aisles of the latest electronics as private security personnel armed with riot guns stood guard over bottles of Johnnie Walker Black. Brazilian reais were the currency of choice and the staff, knowing their target audience, all spoke presentable Portuñol. US Dollars were also gratefully accepted.

Upon the moment of payment, the staff must have been confused by the presence of both the Irish and English languages on my passport (a linguistic kerfuffle reminiscent of the infamous Prawo Jawdy scandal which had foxed the Irish Gardaí a few years prior and a recent trip by the Lord Mayor of Dublin to Israel), and as a result the only record made of my purchases (and presumably my presence) in the country was under my new nom de guerre:

On reflection however, I wondered if this was actually a deliberate slip on the part of the store clerk when it came to my name in particular. Strange though, despite the obvious connotations of the name Lynch in English, surely in Spanish there would be a lesser effect?

Later than I developed a possibly more outlandish theory.

Would this name have stirred a faint memory of an Irish-born chorus girl who once seduced a young Francisco Solano López, then the future President of one of the region’s rising stars?

For it was this femme fatale who shared my surname,  Miss Eliza Lynch, a.k.a. “The Empress of Paraguay”, the face that some say launched an unwinnable war against the Triple Alliance of Uruguay, Argentina and Brazil in 1864, the bloodiest in the history of the continent. Was it she who inadvertently condemned the current residents of Cuidad Del Este to their sorry fate flogging flatscreen to the descendants of the soldiers who once razed their nation?

History can be a cruel mistress indeed.

To the south, lay the land of Borges, beef barons and bacchanalia.

To the west, a humble nation deserving of more repute than a mere Andorra of the Andes.

And right where I sat under the heat of a December evening, the mega-vista of Brazil

In contrast to the Paraguayan experience, the Argentinians perused my passport with mucho gusto at the border crossing near the town of Puerto Iguazu. We lunched on gigantic steak sandwiches with chimichurri washed down with litre bottles of ice-cold Quilmes in the only open café in town, watching thirsty dogs do lazy tango in the midday sun.

Nobody was in a hurry in Puerto Iguazu on that particular day, or probably any other day for that matter. From the short period spent there, it was clear that the town leaned strongly on the passing tourist trade, the cash register drawers in shops even sporting separate sections for Brazilian reais and Argentine pesos. The proprietors of the small supermarkets near the cafe all looked imploringly at us as we browsed their shelves of melted alfajores, searching for keepsakes to commemorate this brief spell in the Argentine Republic. In the end, we settled for some antipasti from a small market and a local delicacy, creamy dulce de leche caramel spread. Even the Brazilians admit (grudgingly) that the Argentines do this particular confection better.

Our return border crossing saw a tailback of holidaymakers making their way towards the beaches of the Southern Brazilian States of Santa Catarina and Rio Grande do Sul,  the average twenty-year old Argentine station wagon in stark contrast with the brand-new Brazilian-registered SUV, a veritable economic vox-pop in automotive form.

We were staying in Foz Iguaçu, on the Western Front of the Brazilian state of Paraná, a town which had grown quickly from innocuous frontier outpost to a tourist-heavy hotspot, complete with international airport, all on the strength of its proximity to one of the most popular destinations in the entire country, the Iguaçu Falls.

The mighty landscape of the “cataratas” have been immortalised in such films as Moonraker, Sergio Leone’s The Mission and even as recently as 2018’s Black Panther. No visit to the area is complete without viewing the falls, experienced travellers say that they are even more impressive from the Argentine side, although the Brazilian side has more infrastructure in place for the less adventurous visitor. One can only begin to imagine the words of the first conquistadores to gaze upon this natural wonder of the world, after cutting a malaria-ridden swathe through the thick jungle surroundings.

Another less well-known (to international visitors) but equally impressive attraction in the area is the Parques des Aves (Birds Park) which contains a large number of diverse Brazilian bird species, in particular that favourite of Guinness advertisements, the toucan, countless parrots (including the blue fronted Amazon, below) and the beautiful gralha azul, or azure jay, another native to the region. 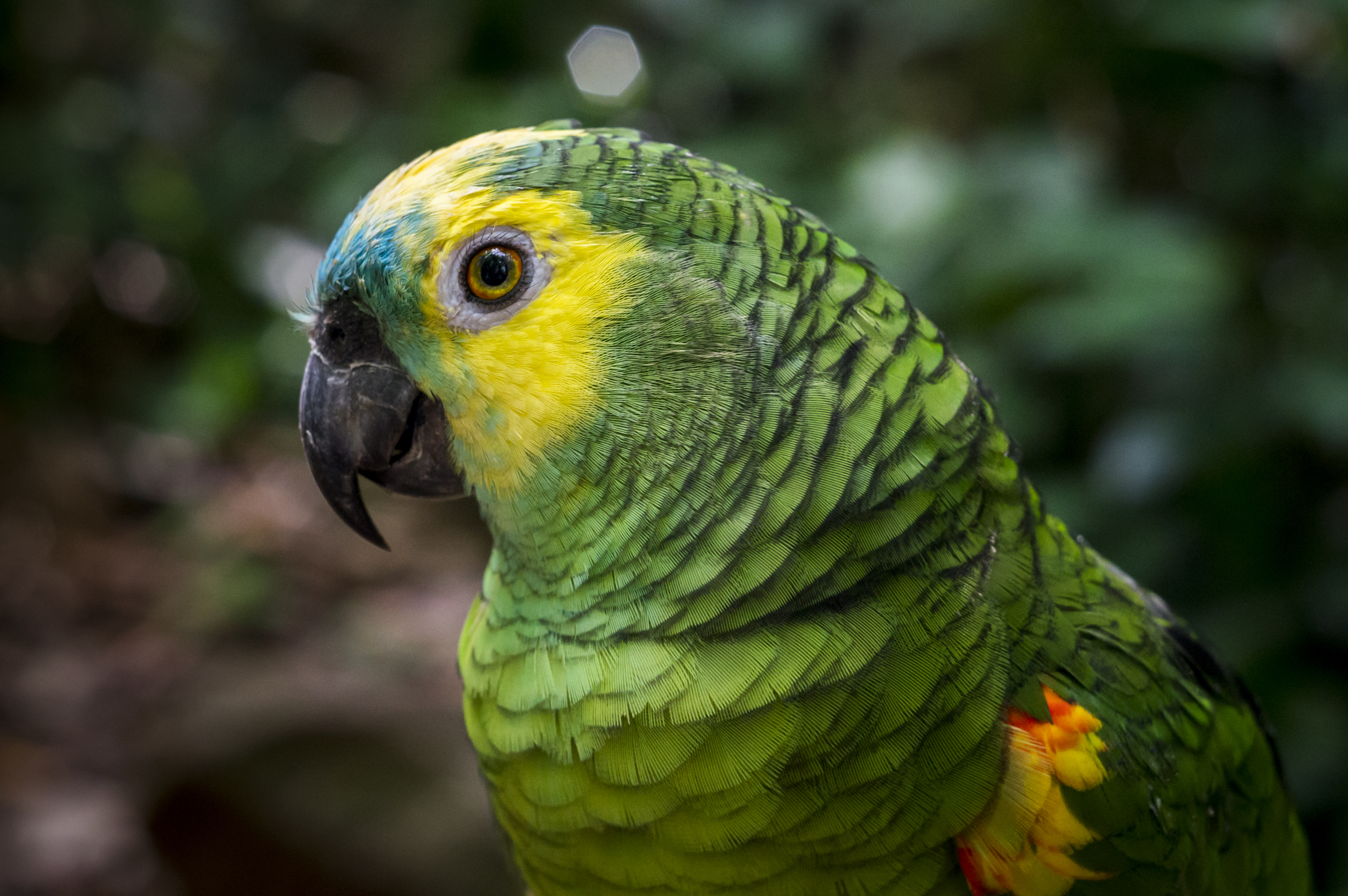 That evening, we dined heartily in a traditional Brazilian churrascaria restaurant in downtown Foz, where meat is barbecued traditionally in the manner of the cattle-herding gauchos who once roamed the pampas, cooking out on under the stars with spits on large open fires.

Nowadays, the meat is delivered briskly to the table on gleaming skewers, choice cuts including rump steak, sirloin and brisket and more exotic delicacies such as chicken hearts and beef ribs, accompanied by a three-man band playing the traditional accordion-heavy music of the Southern cone of South America. A simple traffic light system is in operation, green means bring meat, red roughly translates as Meat-related coma, please hold off for a few minutes.

As we sat enjoying the music of the cattle herdsmen, replete with accordion and strummed guitar, I reflected on the differences between the three surrounding lands, separated by water and historically defined boundaries but united by much more.

To the south, lay the land of Borges, beef barons and Latin American bacchanalia, where years after Miss Eliza allegedly buried her husband and son with her bare hands after the Battle of Cerro Corá, the great-great-great-great-great-grandson of another Lynch from Galway would go from motorcycle riding medico to one of the most infamous revolutionaries of the early 20th century.

To the west, a humble nation deserving of more repute than a mere “Andorra of the Andes” (perhaps with less snow), laid low by a faction of aggressive neighbours over a hundred years prior and largely unknown to many in Europe.

And there as I sat on a warm December evening in the Southern Hemisphere, I thought once more on the land of contrasts that is Brazil, ever “the country of the future” as Charles De Gaulle is supposed to have pronounced it, impossibly vast, incredibly rich in natural resources, flora, fauna and recently Netflix-ified political scandal, stumbling toward modernity, one Havaiana-clad foot after another.

Gerard Lynch, Ph.D is an Associate Editor at Wide Orbits, interested in food, history, travel and the confluence of all three. This is his first attempt at travel writing. He blogs on computational linguistics and digital humanities topics at The Lines Of Others